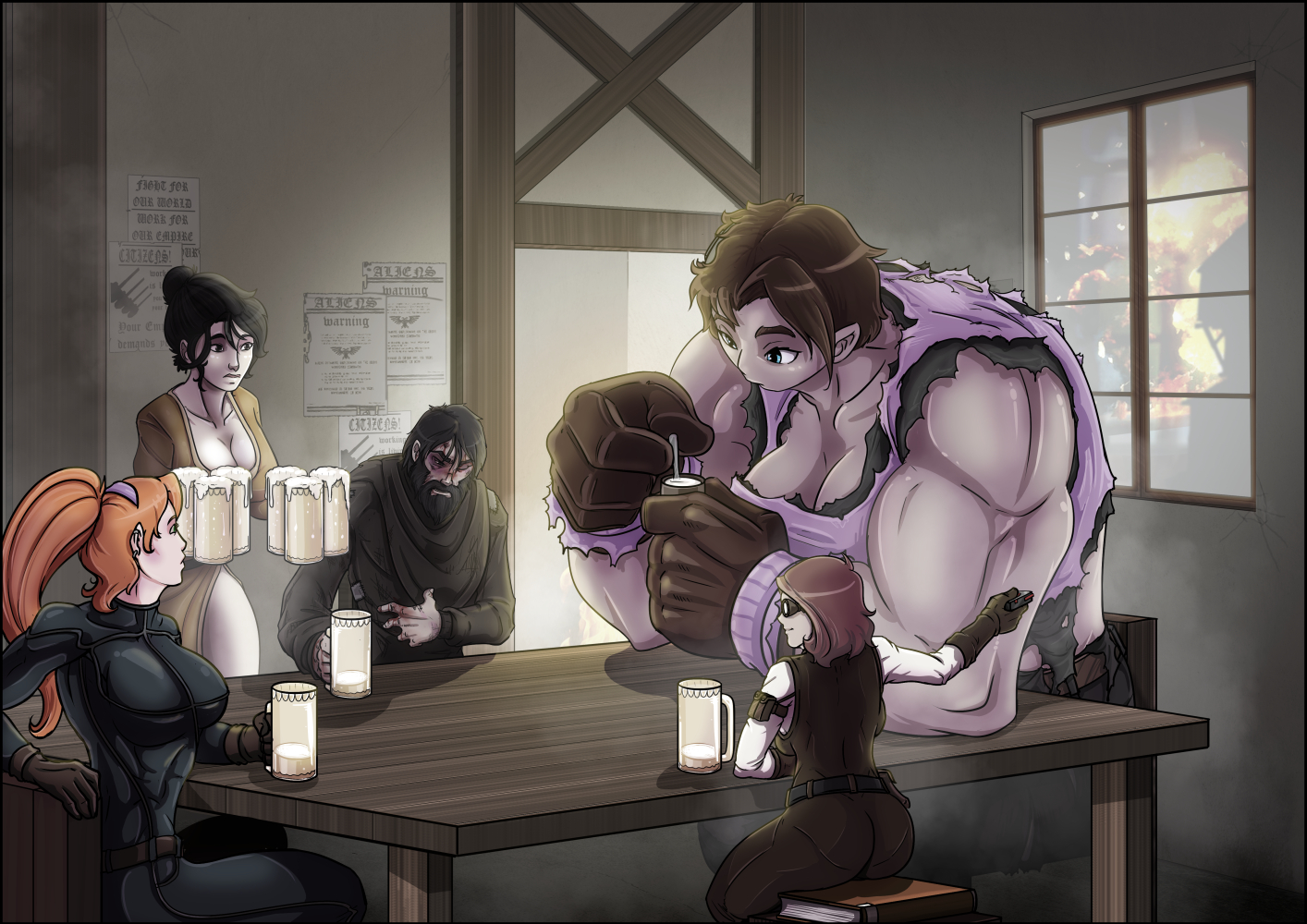 July 7th at 23:19pm
Thanatos lets himself fall on the heavy wooden chair with a gesture of pain and holds his left side. -Those bastards got me a broken rib for sure...-

-Two- answers Nikia dispassionately adjusting the huge glasses that cover her eyes. -And three fissures and five heavy bruises. Although I would worry more about the right kidney, as you may urinate blood for several weeks, as well as...-

The conversation is interrupted by a woman with a generous cleavage who leaves four large jars of a cloudy liquid on the table. Commissar Bryce takes away the jug in front of the huge Ogryn and looks at the waitress.

-No alcohol for her. Lactum with sweetener if you have any.-
The woman leaves and the soldier looks at the commissar with a raised eyebrow.

-She's very young and alcohol inhibits growth- says as she takes a long sip of her drink while looking sideways at the doctor next to her. The woman is quite short by average terran human standards but without falling into physical deformity.

-As I was explaining- the man continues -The problems of Chagoth Primus started a few months ago. The troops established on the planet simply began to disappear. First individual to individual. Then squads, and recently, whole platoons.-

-But where are they? - Asks the commissar. -Everybody knows that in Chagoth there were almost a million troops equipped and ready to reinforce the lines of the Venisae Crusade, and almost twice that amount whose training period was almost complete.-

-You are well informed- says the man gulping down his drink. -I suppose you must, to be a good trader...- Thanatos shrugs. -Nobody knows where they are. There are rumors that they were reassigned, but nobody knows where, or even if they are still on the planet.-

The waitress returns with a glass of whitish liquid with a small spoon inside and leaves it in front of Anya. When she walks away, the man continues talking.


-I belonged to one of the last platoons to be reassigned. The 106th of Chagoth was a group of veterans who did not get along very well with the local commissar, and when we found out about the plans, some of us decided not to follow the order.-

-You could say that-

Thanatos shrugs- It was no secret that there are no news of those who were "reassigned", so we preferred to investigate on our own, which led them to put a price on our heads becoming the target of all gangs in the hive.-

-... which reminds me...- says the little woman as she licks her lips and pulls out a small remote control from one of her pockets. She looks at the commissar behind her thick glasses and hums as she enters a code into the device. -I`m charging you for this, merchant.- says pressing a last button to confirm the secuence.

An explosion shakes the street and rumbles the windows of the small tabernacle, but nobody seems to react or be surprised. The commissioner looks at Nikia, who distractedly throws the device into the fire.

-I do not like to leave files or documents behind me... - she says taking the jar to her lips -nor vengeful gang members who take me out of bed at night and threaten me.-

What should the group do now?

-If the commissar considers that she has enough information, they can return to the High Command and inform Commander Pernus.
-If on the contrary, she considers that they should inquire a little more before sending a report, the group can infiltrate the military barracks of the planet to investigate the records of troop movements.
-Or you can also stay at the bar and do other things, like drinking another beer, or execute Thanatos Tempesti as a deserter traitor.