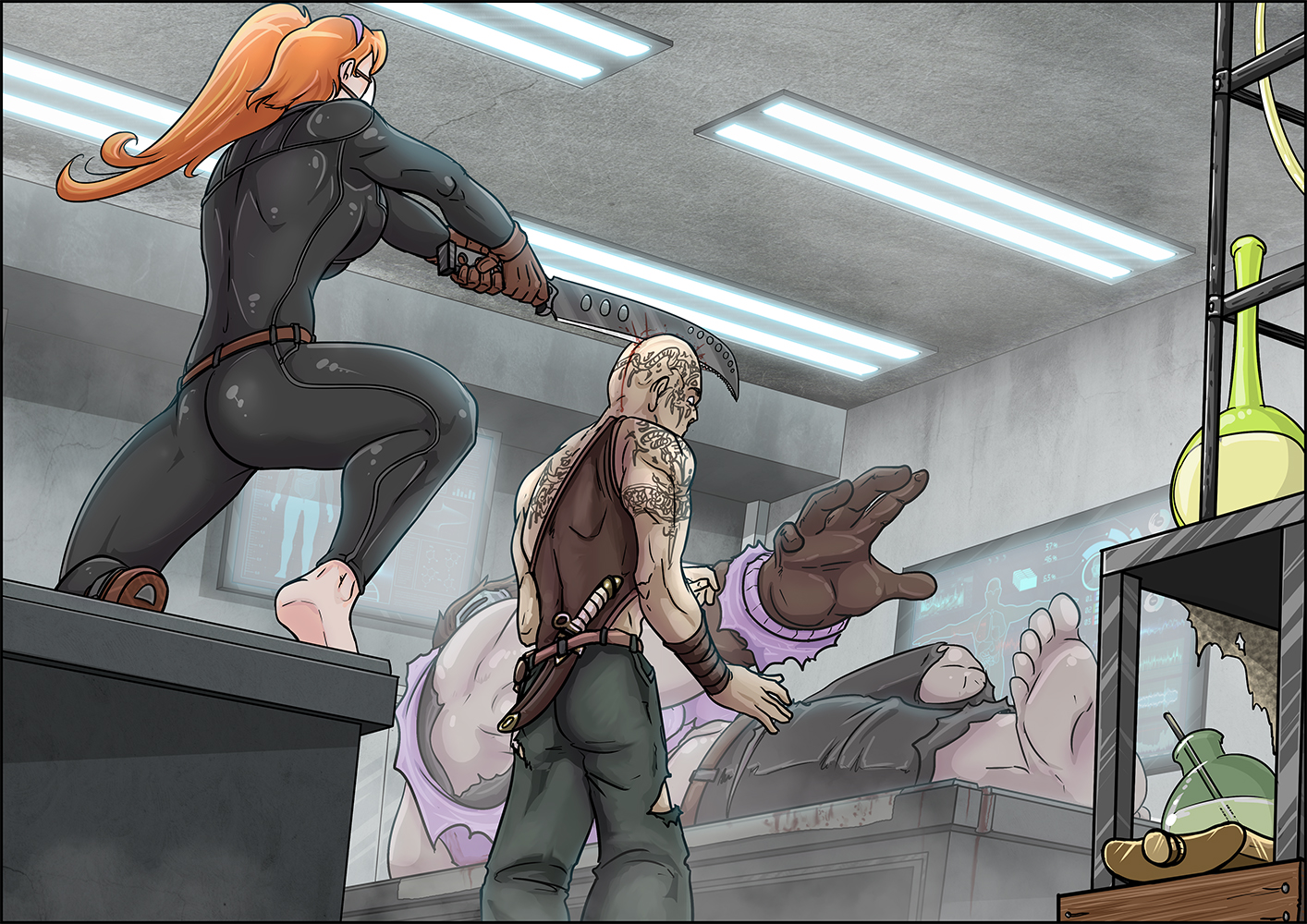 July 7th at 23:08pm
Nikia prepares a charge in her injection gun. It is a mixture of stimulants from her own cooking that may not have passed all the controls required by the magus biologis, and that perhaps it hasn`t even been tested before in humans, but for some reason it gives her good vibes.

The little frame of the doctor shrugs while injecting the substance in the neck of the woman "Mere matter of politics. Surely nothing bad will happen."

The man lets out a low moan when the gun pushes the substance into his bloodstream.

Upon reaching the enormous abhuman, the doctor empties the rest of the entire load into the main artery of her neck, thick as her own wrist and her heart begins a jackhammer-like beating. The machinery shows the beginning of a growing cardiac arrhythmia.

-Whops! - says the woman, ejecting the empty gun's charge as if it were a discarded ammunition cap and putting a muscle relaxant in its place. The heartbeat stabilizes after a few seconds and Anya opens her eyes slowly panting.

At the other end of the room, the badly wounded man dies when his heart decides to rebel against the cocktail of chemicals and stops. A languid beep crosses the room when the heartbeat meter gets locked to zero. The woman rolls her eyes and snorts.

Crossing the room in small but quick strides, the woman opens a drawer and pulls out a thick glass syringe with a metal plunger. Without slowing down, she loads the needle with a cloudy liquid and stabs the man in the heart...

Or that is her intention. The needle slips with a rib and bends against the sternum of the man bending itself out of shape. The woman takes the syringe with both hands, ignoring the folded needle and stabs it again in an odd angle, flooding the man's heart with artificial adrenaline.

"It's almost as efficient as the real thing and much cheaper" she had defended several times in front of many wounded people (almost all of them unconscious). The only problem is that the following days the patients used to complain of pains in the kidneys and blood in the urine but, what is that considering the alternative?
The man goes into shock and begins to convulse, his limbs throwing medical instruments to the ground as he begins to seizure, growl and salivate like a rabid animal. The doctor climbs on top of the patient and inserts a thick strip of leather into the man's mouth so that he does not tear out his tongue while trying to control his violent movements. The door opens and one of the gang members enters the room.

-Nothing! -Everything is under control!- shouts Nikia before being pushed down the table over a pile of boxes and machinery.

The gang member walks through the room and reaches for the doctor, when the blonde woman opens her eyes suddenly and instinctively crouches on the table like a feline feeling her empty belt for a weapon. Before the gang member can scream, she takes a thick machete of vivisection and sunders his skull with it.