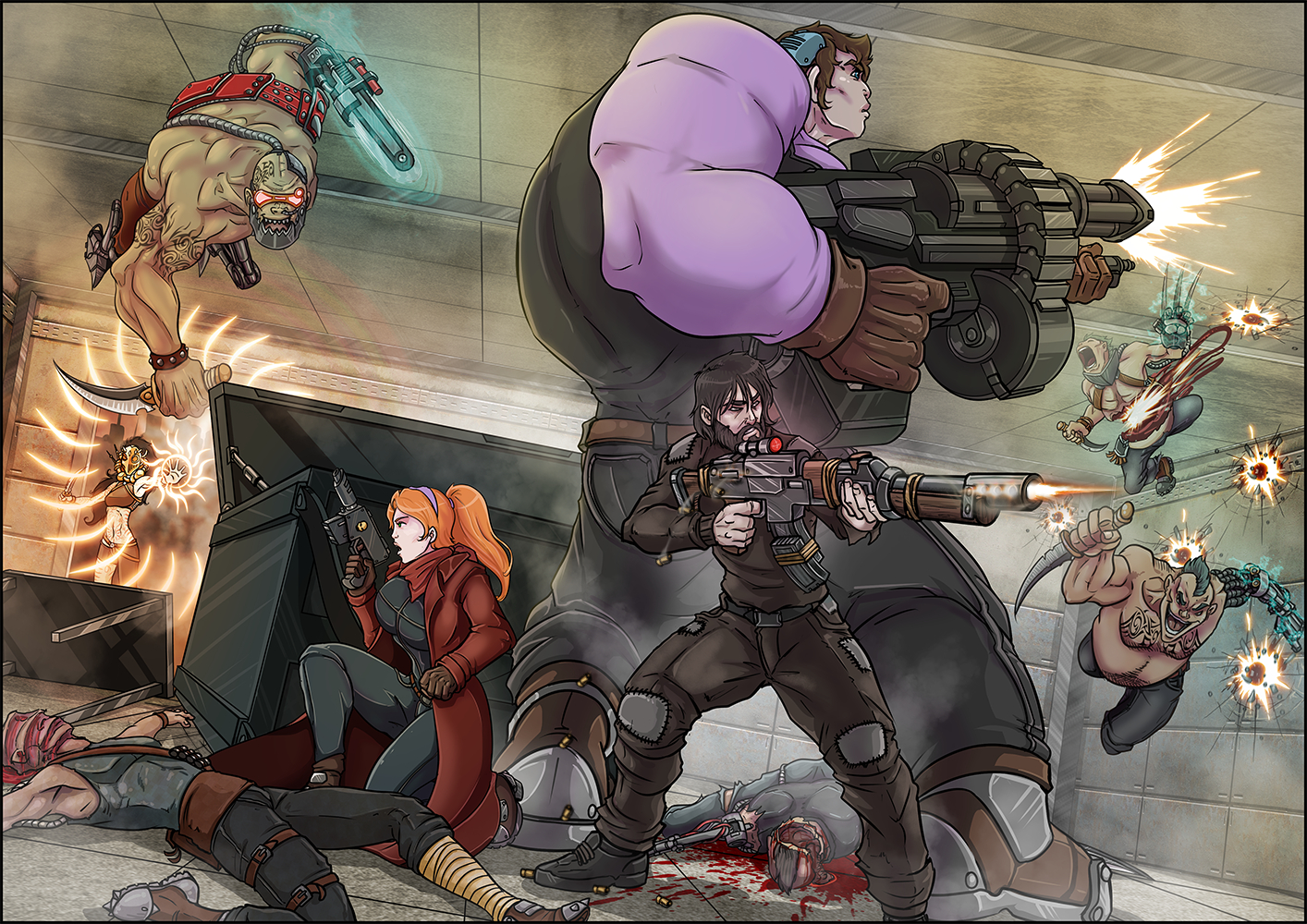 July 7th at 22:21pm
It only takes a second for Commissioner Bryce to make her decision. In a quick gesture, she draws her laser pistol and shoots the leader of the assailants, blowing off his head. In the time of a blink, another grunt falls to the ground holding his pierced neck.

A sullen crunch sounds when Anya clenches her fist over the head of the writhing grunt and his body falls to the floor with a metallic clank while another assailant wielding a home-made assault rifle attacks the shabby looking man trying to hide behind a tipped over sturdy metal table.

With an accurate shot, the commissar blows off the assailant's head and takes cover behind the giant ogryn right before the rest of the gang who were waiting outside break in through the front and back doors carrying light shooting weapons and a great variety of melee combat arms.

-Anya, take out the pacifier!-

The giantess drops the huge armored container and it breaks the floor tiles as it falls and opens with a mechanical hiss. From the interior he extracts an oversized and brutal rifle with three rotating mouths that spread mayhem and havoc among the compact group of assailants who were trying to flank them. One of them, a highly modified and armored man with a long metal claw for a hand assaults Commissar Bryce and her thermal shots are stopped by the grunt's armor.

The curse dies in his throat when a solid projectile hits the eye socket of the assailant and separates the armored cover of his skull from the rest of the head spreading its contents around the room. The shabby-looking man has picked up the grunt's primitive assault rifle and fires with prodigious marksmanship.

-Thanatos Tempesti, soldier of the Glorious CVI of Chagoth Primus! - answers over the roar of the pacifier and the erratic bursts of gunfire from the assailants. A “click” is lost in the rumble when the man sets the weapon into bust mode and points towards the main door, forcing the assailants to cover. -If we survive this, you can call me Thane, Milady-

Suddenly, the temperature of the room drops to zero and a chill goes down the spine of those still present in the dark tabernacle. Cropped against the dim light of the hive city, the slim figure of the tattooed woman begins to glow and a series of metal rods emerge from her full helmet.

Her voice echoes in the heads of the group and from her outstretched hand a reddish smoke begins to solidify in hot red burning rotating runes.

- I prefer the term "Cosmic Witch"-