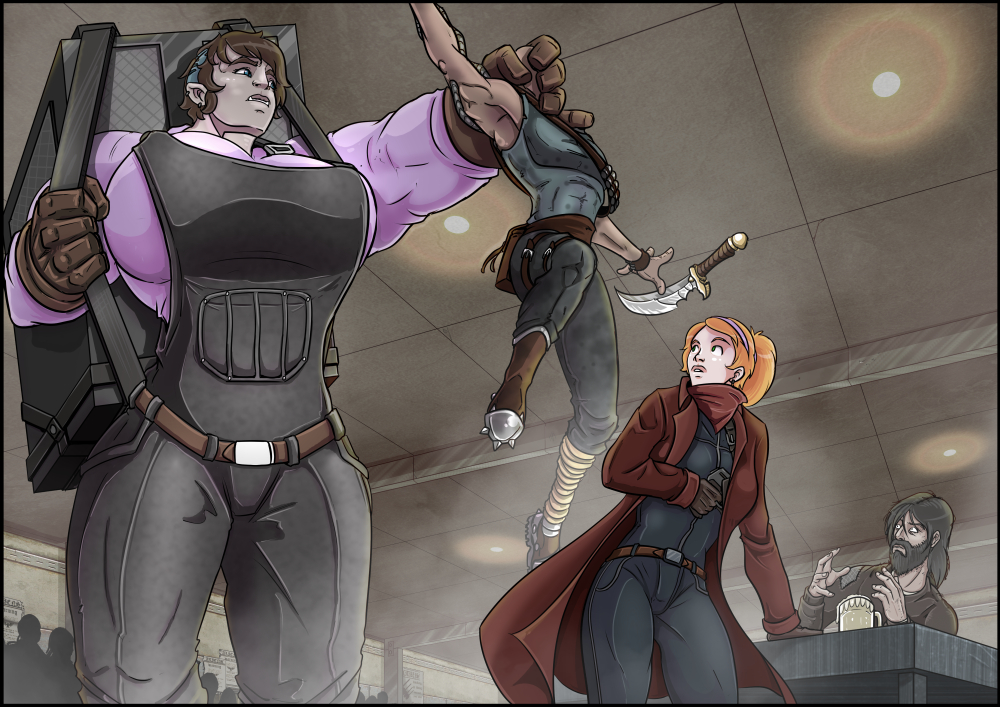 July 3rd at 14:28pm
-This seems promising- thinks Commissar Bryce looking at the dark room embedded between two pillars of containment of the lower levels of the hive. The woman looks at her companion and the gigantic figure carrying a cladded container behind her leans over her, dwarfing the Commissar.

-Wait out here until I`m back. Understood? - Bryce points to the ground and repeats with a stress on each syllable- Wait for me outside-
Anya nods twice with an exaggerated gesture and enters the room right behind the woman.

Faint faces drowned in bad liquor turn from the shadows to look at them for an instant before returning to their task of poisoning their bodies. The place has the characteristic stench of a hive; that mixture of human sweat, lubricating oil and despair. The merchant clothes of the couple don`t fit between the dirty tunics and the work uniforms stained with soot.

Bryce takes a pitcher of a muddy drink from the counter and goes to a table where a scruffy, feverish-looking man drinks alone. A small crowd approaches to try to hear something useful to sell to the information traffickers. She puts the jar in front of the man, who looks at her through his matted hair.
-Greetings, good man. We are newcomer independent merchants looking for some contacts in the city. We would be more than willing to...-

A brief metallic glow attracts Anya's attention, and then the muffled muttering of a man hanging from the outstretched fist of the huge Ogryn cuts the Commissar's speech and attracts the attention of the nosey people around. The man, slightly cyber-modified, kicks in the air and a more ceremonial than functional looking dagger falls from his hand.

-If you move knife like that, you hurt big sister-

Before Bryce can say anything, the shabby man looks at the fallen dagger and stands up, pushing the heavy chair down with a metallic clang and a local dialect curse. -Furth! They're here!-

Three figures enter the premises and all noise stops. Many regular customers scurry through the back door and others take cover behind the columns or in the darkness of the corners.


-We told you we would find you, vermin.-

The modified man`s eyes, runs through people and stops on the Commissar and the Ogryn still holding the man writhing in her fist. He makes a comical bow totally out of character with his brutish looking metal armor and weapon implants and smiles showing lines of pointy metal teeth,


-Independient traders. My gang will be more than willing to make deals with you when we finish this matter. Please, release my man, step aside and this will be over soon.-

Two more gang members come inside the room from the back room and one of them activates a brutal looking chainsaw implanted where his left hand should be. The other one, a young lady with tribal tatoos and a full helmet unsheathes a similar oddly looking dagger while they walk towards the shabby man and smiles at the Commissar:


-Don`t get involved and you will not lose money.-


Do you get involved?

1- Yes. Face the gang and rescue the shabby looking man. He may have valuable information and he obviously is in the middle of something important.
2- No. You are obviously outnumbered right now, and there might be even more gang members outside. Also any rush action could blow your cover. Leave in the confusion and get on with the mission somewhere else.
2- No, but the gang members may prove a valuable source of information. Wait for them to finish their business and deal with them.